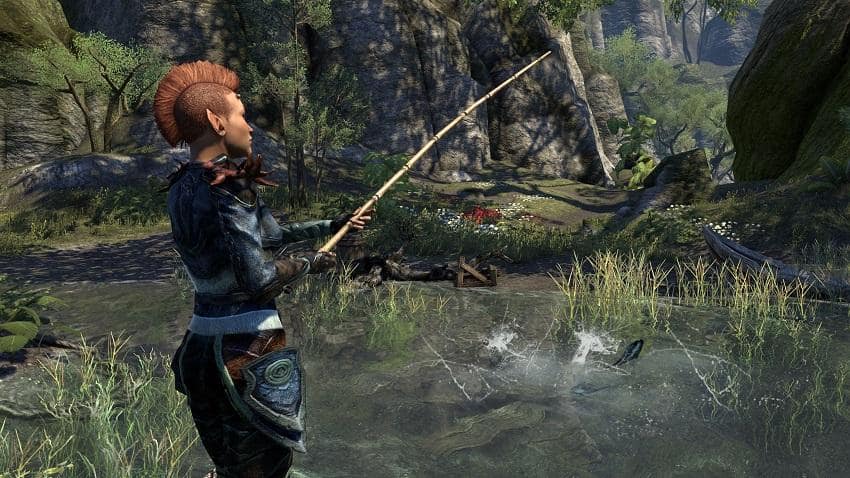 Fishing is one of several activities available in Elder Scrolls Online. It requires bait and a fishing hole. Bait can be gathered from various creatures around the world, such as beetles, rats, and butterflies as well as obtained via fishing or gathering plants.

Every fishing hole has 15 catches, except ones in the Imperial City, which have 30.

Can be used as bait in fishing holes, the bait that can be caught in each hole is listed in the table above.

Can be opened from the inventory and contains miscellaneous crafting materials such as trait materials, tempers, style materials, or enchanting runes.

Catching them will count towards the fishing achievement of the zone it has been caught in. As it has no other use it can be sold to the merchant.

One of the following, that can be placed in the home:

Status effect the character can have when consuming Hissmir Fish-Eye Rye (Which can be created via provisioning or bought at guild traders). The drink grants “Keen Eyes” similar to the unlockable perk for crafting material nodes. This will highlight fishing holes with a glowy effect to make them easier to see.

Status effect the character can have when consuming Artaeum Pickled Fish Bowl (Which can be created via provisioning or bought at guild traders). The food causes fishes to be attracted to you, which shortens the time needed for fish to bite.

There is a slottable champion point node called Angler’s Instinct which will increase the chance of catching higher quality fish, similar to the group fishing bonus. This effect will stack with other bonuses that are active.

This is also a slottable champion point node called Reel Technique that decreases the time it takes for fish to bite by 25%. This effect will also stack with other bonuses that are active.

Although never being officially published, there seems to be a bonus when fishing in the same hole with multiple people. It seems to be a 5% chance to get trophy fish, bait and Wet Gunny Sack when fishing alone. When fishing with 2 people the bonus seems to be 10%, with 3 people 15% and with 4 or more people 25%.

To help with finding certain fishing spots to get the tropy fish needed for achievements, the Captain Trout’s and the Chancellor’s ESO Fishing Map provided by House Tertia can be used.